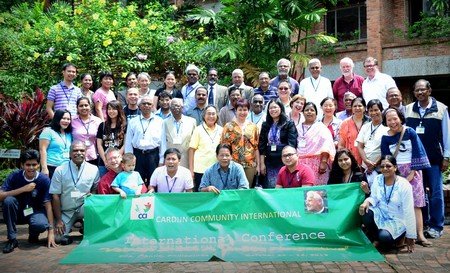 The process for Cardijn’s canonisation began with a resolution adopted at the Cardijn Community International Vatican 2-50 Conference in Manila in 2012. Below we reproduce the original news report of the event.

The Cardijn Community International is launching a campaign for the canonisation of YCW founder Cardinal Joseph Cardijn following its Vatican 2+50: A Cardijn Perspective conference in Manila from 11-14 October.

A committee will begin work towards the canonisation immediately, CCI convenor Stefan Gigacz said in a statement.

“Cardijn played a key role at the Second Vatican Council as a member of the Pontifical Commission on Lay Apostolate and later at the Council itself,” Mr Gigacz said.

“As recalled by former IYCW President Ms Betty Villa in her video presentation, Cardijn insisted that the Council should recognise the specific role of lay people in the world acting consciously and responsibly to transform the world in the ordinary circumstances of life.

“His See Judge Act method was endorsed by the Vatican II Decree on the Lay Apostolate, Apostolicam Actuositatem, and was adopted in the drafting of the Pastoral Constitution of the Church in the Modern World, Gaudium et Spes.

After the Council, Cardijn’s method formed the basis of the “new evangelisation” process launched by the Latin American bishops at Medellin in 1968.

¨”It is extremely heartening to hear that, in his address to the Synod of Bishops, Chilean Bishop Pedro Ossandon Buljevic again emphasised the See Judge Act method as integral the process of ‘new evangelisation’,” Mr Gigacz added.

In other major decisions, the conference also adopted resolutions to prepare an international survey into the social impact of Vatican II among grassroots Catholics around the world, the results of which will be shared at a global conference to be held in India in 2015.